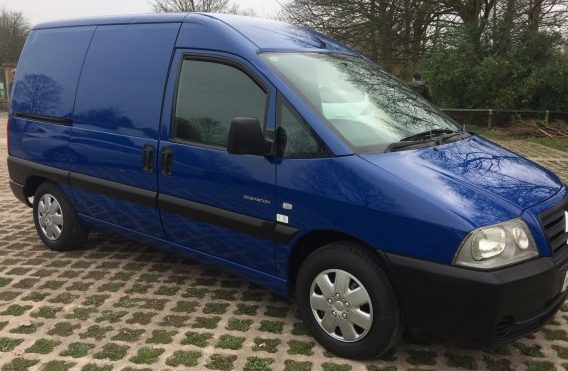 I recently had a problem with my van

first it seemed like fuel starvation or a blockage, so i changed fuel filter and air filter, made no difference, so i dropped it at my local mechanics who took the van to drive to see if he could tell what was wrong, he put it on diagnostic & checked the injectors, he returned the van saying he couldn’t find anything wrong & to return it if it got any worse.

Within 2 weeks the van got very noisy and very sluggish, but it still started on the button and wasn’t using excessive oil or water.

I dropped my van to the same mechanic, who took a quick look and said, I think its engine problem you need to take it to a diesel specialist which i’m afraid is going to cost you £200 just to diagnose the problem, that bad i said, he said personally i’d scrap it or put it on Ebay as a non runner.

I was gutted, i had only had this 2006 model Citroen Dispatch 6 months and it had a recon engine in that had only done 76k miles, was a real tidy van, immaculate inside and out, so i drove it away again.

I saw a friend while out walking the dog, subject of my van came up and he suggested me taking it to his mechanic.

I took my friends advice and called his mechanic, who said sure bring it around ill take a look.

I pulled up to my friends mechanics yard in my van, he came out and introduced himself and said stinks of fuel, you must be breathing that in, he jumped in van i sat in passenger seat and we drove about a mile around and back to the yard, on route i pointed out the different noises etc on which he acknowledged, we pulled back up at his yard and said, i’ll be honest with you mate, that’s engine probs, if i was you i’d cut my losses and scrap it or sell it as a non runner, its tidy so you may get a bit more.

I was gutted again, but something told me not to take either mechanics advice, the engine was still not losing oil or water and still starting on the button, but was driving like a sack of poop. but was still driving, so i carried on using it.

I noticed one day when i was at lights that smoke had started to come from the engine, at this point i thought, i really need to make a decision here.

Still going with my gut instinct and hope i decided to look on the internet for a local garage, I found one called AT Autos in Hoddesdon. I decided to just drive it around there without an appointment and hope they take a look.

I didn’t mention earlier as it seemed irrelevant, but both previous mechanics were British, it makes no difference to me, but when i took the van to AT Autos the first guy i met was Polish who had an entirely different attitude, I said i had smoke coming out of the engine & could he take a look, Sure he said, he walked towards my van, asked for the key and started it up and within 10 secs said, no problem book it in tomorrow and ill fix it, will it be expensive? i asked, not too bad he said. So still sceptical i booked it in.

I dropped van off the following morning and got a call at about 2 pm from Tony, an Italian guy the companies ‘on tools’ owner, he was very polite and said i’m sorry we thought it was an exhaust leak, but on going over it we have found your exhaust is blocked and your catalytic converter has gone, it’s going to cost £330 with the VAT to put right, are you sure it’s that i said, 100% Tony said, Great i said fix it.

Within 2 hours Tony called and i picked up my van (still sceptical) and was over the moon, it now drove like brand new and hummed almost silently like a dream.

Two British mechanics tried to solve the problem and told me to scrap it, It took a Polish guy to take it in and an Italian guy to sort it, I’m British myself and feel the first 2 mechanics just couldn’t be arsed as computer said No and engines was a dirty job.

So glad i persevered and went with my gut instinct and i’m so glad i found Tony at AT Autos Hoddesdon.

Good honest work with a good honest price and he doesn’t tell you to scrap your vehicle unless it really does need scrapping.

I won’t name the other two mechanics that couldn’t work out what was wrong, as i’m sure they have many happy customers with easy text book jobs for them, but in theory they should be very ashamed of themselves.

I now use Tony for mine and my wives vehicles, he earned my trust, custom and a lot of respect, Thanks Tony and Polish guy you saved me £2000.

This is not an advert for AT Autos it’s a genuine blog review from a very satisfied customer, i feel the least i could do. They give a genuine honest service, not super cheap but by no means expensive, I myself am a small business owner and i know what a good review does for a small company, ten minutes of my time can give them more deserved business and these guys deserve it.

Visit AT Auto and i’m sure you will get the great service i did.